*This specific glass item was produced sporadically from 1915-1970 under different names.  As a Pretzel Jar & Cover, its production dates are from 1933-1944.

I actually like to use this item as a pretzel jar, more so than a cookie and/or cracker jar.  Back in the day, it was quite popular to have a container of pretzels sitting on a cocktail or beverage bar.  Today, if you’re lucky enough, you might still see this custom being practiced.   This tradition was so popular that Fostoria Glass even classified the Pretzel Jar & Cover as a “Liquor Item” in their official catalogs and price lists.  It was often seen with Decanter Sets, Footed Cocktails, and other assorted beverage items.

These jars (Pretzel/Cracker/Cookie) can vary by about ¼” in height, and most of the time that can be attributed to the size of the clear band of glass seen at the top of the jar.  The jar opening has a diameter of approximately 5¾”, with a smooth (non-serrated) rim.  Many of the bottom pieces of the Pretzel Jar (aka Cookie/Cracker) were sold to other companies that fitted them with wooden tops and other accessories to be sold as cigar and Tobacco Humidors. 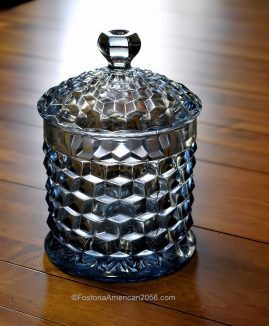 After the mid-to-late 1980’s, the mould for this piece was in the hands of different glass companies – Dalzell Viking Glass, etc.  Since the Fostoria Glass factory had already closed down, Dalzell Viking was contracted to produce a variety of American pieces from original FA moulds.  This Pretzel Jar & Cover was one such piece; however, when it was reintroduced and produced by Dalzell Viking – it was called a Cookie Jar & Cover.  Dalzell produced it in a Blue/Grey color (seen here) and a Cranberry/Pink color.  Other colors were made by L.E.Smith Glass Co.

If you are interested in purchasing similar items in the Fostoria American line, please click the following sponsored link for available Pretzel Jars on eBay.

The Cigarette Box & Cover is really a stunning piece of glass.  Even though many of us don’t smoke today, there was a time in our history when it was quite the popular thing to do.  Look at any old Hollywood movie, and it seems everyone was smoking.  I believe Fostoria Glass would have been amiss if they had not produced a cigarette holder for smokers, as it was quite in vogue at the time this piece was born.  Decades later, this glass box is still a stunner – and it makes for a beautiful addition to any room.  Ladies love to use them today for holding jewelry, pearls, or other special treasures.  This box can really be used for anything, as there is nothing in the design that shows it was initially used for cigarettes.

The Cigarette Box and Cover is about 2″ high, 4¾” in length, and 3½” in width.  It consists of two separate pieces, the box and the cover.  While this item was originally sold separately, it was also one of the items in the 5-Piece Smoker Set. The Smoker Set consisted of one Cigarette Box and Cover and four Square Ash Trays.  Smoker Sets were often set out on tables when entertaining guests, and were often seen accompanied by other American items – such as the Decanters and Ice Tubs.

If you are interested in learning more about current availability and pricing for similar items, please click the following sponsored link for Cigarette Boxes on eBay.

Fostoria Glass produced a variety of boxes in the American pattern.  They considered the Pomade and Cover to be a “cologne and toilet article”.   Cologne and toilet articles included different items – from Colognes to Comb and Brush Trays, and more.  While some of these same items were included in their colored “Boudoir Sets”, the Pomade and Cover was not. 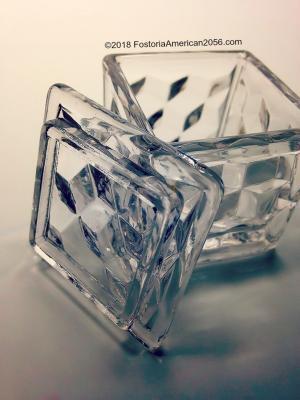 What exactly is pomade?  It is a product that gives hair a shiny and slick appearance.  It was quite popular in the early 20th century, which relates to the time period in which Fostoria produced the Pomade and Cover – from 1916 to 1925.  Murray’s Hair Pomade was a highly sought-after product that was available in the mid-20’s, and is still available today.

The Cover is level on the top; however, the underside has a retainer ring that fits just inside the walls of the box.  This design helps keep the Cover secure.  It is important to note; however, that many boxes and covers (when fitted together) will have a slight wobble to them.

If you are interested in learning more about current availability and pricing for this piece, please click the following sponsored link for available Boxes on eBay.

There are certain items in the Fostoria American line that were produced for a few years and then discontinued – only to resurface years later under a different name.  As our eating and dining habits changed throughout the years, reintroduction of previously produced items seemed quite practical.  The Pickle Jar is one such item, for it was later called the Jam Jar.

When the Pickle Jar was first introduced, it was in the debut of the American pattern.  The year was 1915, and it stayed in production through 1925.  It would resurface in the mid-1930’s under a new name, the Jam Jar.  The Jam Jar was produced through 1943, and then dropped from the 2056 line. 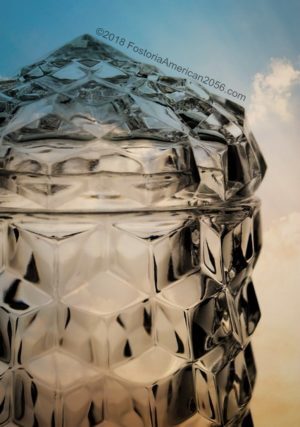 Of all the covered pieces in the American line, the Pickle Jar Cover is one of the most unique.  While the cover is easy enough to remove from the jar portion, one should do so with care.  Unlike most other covers, this one does not have an official knob or handle for retrieval.  In contrast, this particular piece has a slightly elevated point resting on top of its lid.

It is quite common to find Pickle Jars without Covers, as many bottom pieces were sold to other companies that specialized in making metal filigree frames, holders, and casters.  These were very decorative pieces, and special covers were made for such items.  There are also Pickle Jar bottoms that were never intended to go into holders; instead, they were adorned with beautiful sterling silver lids.  Obviously, the Pickle Jar bottoms were made by Fostoria; however, they did not produce any of the decorative metal lids or holders.

If you are interested in learning more about current availability and pricing for this piece, please click the following sponsored link for available Pickle Jars on eBay.

The Fostoria Two Handled Preserve and Cover is a beautiful and unique piece, bearing a handle on each side. It is rather unique-looking, and therein lies its charm, as it was designed and first produced over a hundred years ago.  The Two Handled Preserve and Cover is one of the pioneering pieces in the American #2056 line, and made its initial debut in the Fostoria American 1915 Catalog Supplement.

While its original purpose was to serve preserves and such, there are many other ways to utilize this dish today.  I still use it for its original purpose; however, I have also used it as a candy dish, relish dish, for serving after-dinner mints … and the list goes on and on.  If you use your imagination, you will soon find that there are a variety of ways to use this versatile piece. 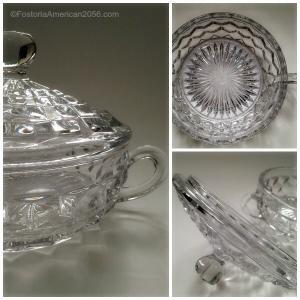 The Two Handled Preserve and Cover has a diameter of approximately 5½” –  5¾” (not counting the handles) and a height between 4″ – 4½” (including the cover).  The bowl portion has a beautiful starburst design in the bottom, and the Cover has smooth edges (not serrated) on the bottom rim.  I find the two pieces make a good connection.   Without any serrated edges to match up when putting the Cover back on the dish, the chances of damage are usually reduced – especially since both pieces have smooth edges.

The Two Handled Preserve and Cover was made for less than thirty years; therefore, they are not as plentiful in the open market today.  They are not considered rare, nor are they considered a common find.  If you are interested in learning more about current availability for this piece, please click the following affiliate link for available Two Handled Preserve and Covers on eBay.

The Fostoria American Marmalade and Cover looks somewhat similar in form to the American Mustard and Cover. The Marmalade and Cover was only manufactured for a few years, starting around 1937.  Because of its limited life span, this piece is not considered a common item, nor is it extremely rare. What is difficult; however, is finding the original spoon that was sold with it.

The Marmalade did not have a long life, and was only produced through 1943.  The initial production of this 3-piece set included a Chromium Spoon. Later in production (circa 1942), the Spoon changed to a Silver-Plated version.  Some of the published books on Fostoria American have conflicting information on the details and photos of the Spoon.  I don’t agree with all that I have read or seen. 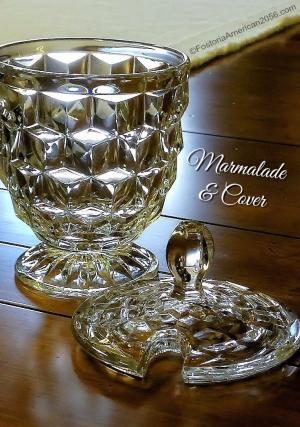 Based on my research thus far, I have never seen Fostoria Glass list the Marmalade as having a glass spoon.  Even though there are some books and/or publications that show the Marmalade and Cover with a glass spoon, it appears that the spoon is much shorter in length than it should be.  I think it is possible that the author used a spoon that went with the smaller Mustard and Cover, and this would explain why in the book’s photo … the spoon barely pops through the hole of the Cover. The height of the Marmalade and Cover is approximately 5½” – in comparison to the 3¾” height of the Mustard and Cover.

One immediate way to tell the difference between the Mustard and the Marmalade is to look at the bowl’s foot. The Marmalade foot consists of a beautiful starburst or ray design.  In contrast, the Mustard has a plain foot. While many people get these two pieces confused – if you remember this distinguishing fact, you will be able to determine its true identity.

If you are interested in purchasing this set, please click the following sponsored link for available Marmalades on eBay.