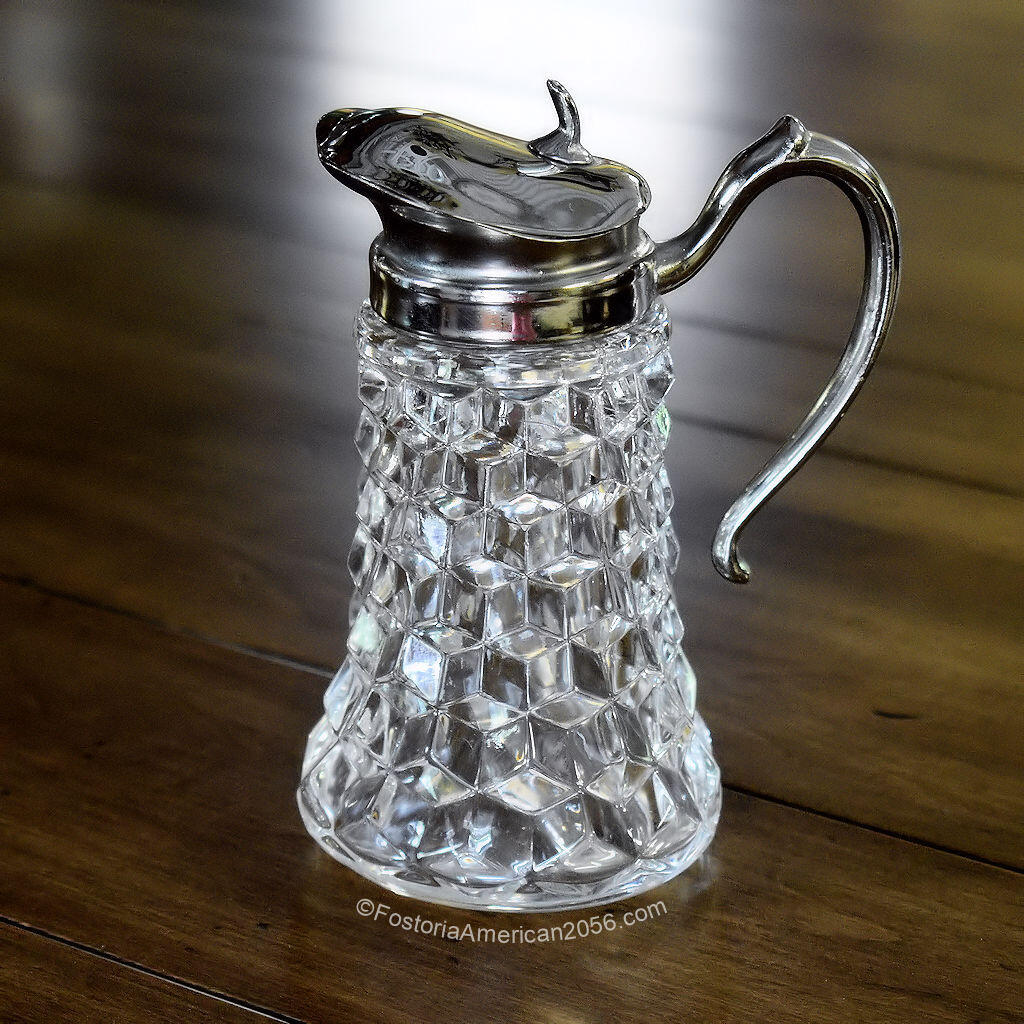 This lovely, and very old piece, has an interesting history.  To begin with, the Syrup with the Metal Handle is a pioneering piece in the American 2056 line.  When it was first featured in the 1915 catalog supplement, it was described as the following:  “Syrup N. P. Screw Top”.  The “N. P.” refers to the item as being nickel-plated.  While the handle was not mentioned, the illustration in the catalog featured a fancy metal handle.  Two different handles have been seen with this piece, and the featured photo in this post shows the more plain handle. 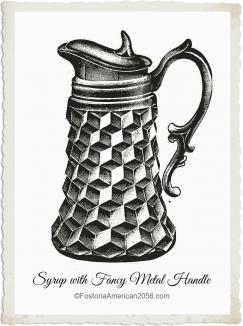 Here is an illustration of the Syrup with the fancier metal handle, which is the one that was featured in 1915.  Both types of handles are shaped the same way; both are made of the same metal.  The only difference seems to be in the fancy scrollwork towards the bottom of the handle.  It is my belief that more of the plain handles were produced, simply because those are the ones most often found.  The Fostoria documentation (catalogs/price lists) only mention this item as having a metal handle – with no distinction between them being “plain” or “fancy”.  Therefore, the only dates we know for certain are 1915, when the Syrup with a fancy handle debuted, and 1923 – the year the Syrups (with metal handles) were last produced.

The official name for this piece is somewhat confusing, as it appears that Fostoria Glass listed it in their catalog as being a Syrup.  However, in a separate price list for the same year, they listed it as a Molasses Can with a Metal Handle.  The confusion is that there already was a bigger Molasses Can pictured in the catalog, right next to the Syrup.  A few years later it appears that Fostoria Glass noted this discrepancy, and thereafter it was listed in the price lists as a “Syrup”.  It remained so until it was no longer produced.

I have found clerical errors in the 1915 price list, as conflicting data has been found between the actual list and what is shown in the catalog.  If we go back in time, without the help of computers, compiling and referencing a volume of information such as this would have been quite an undertaking.  Was the Syrup incorrectly listed in the 1915 price list, or was it their intention to call it a Molasses Can?  Since the original catalog shows a Molasses Can and a Syrup as two separate items, and the fact that the price list was corrected a few years later, I believe the original name for this piece was intended to be the Syrup – and have listed it as such.  That being said, please know that some people might refer to this item as a small Molasses Can – based on the information in the original price list.

If you are interested in learning more about current availability and pricing for this piece, please click the following sponsored link for available Syrups on eBay.