The Oblong Butter and Cover has an approximate height of 2⅛”, a length of 7½” and a width of 3¼”.  All pieces can vary slightly in size, as each piece was handmade.  It was produced from 1940 until the early 1980’s.  It was one of the few pieces in the American line that was still being produced in 1983. 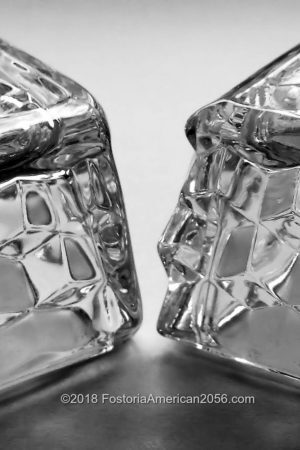 One important point to remember about the Oblong Butter Cover is that it was produced in two variations.  The first variation has the cube design wrapping around all corners; the second variation features smooth corners.  It has been my experience that the latter variation (with smooth corners) seems to withstand the age of time a bit better.  The protruding cubed corner variation is more prone to nicks and chips.

The Oblong Butter can be used in a variety of ways, other than for just serving butter.  If the lid is inverted (turned upside down) it can become a beautiful storage or flower box.  In fact, Fostoria Glass Company officially called the lid a “Flower Box”, and it was featured in their catalogs as such.  The inverted lid also acts as a beautiful table piece to serve individual sugar or tea packets, allowing guests to retrieve them in an orderly fashion.

If you are interested in learning more about current availability and pricing for this piece, please click the following sponsored link for available Butter Dishes on eBay.