For the most part, Fostoria Glass classified their larger pouring vessels as “Jugs”.  They did produce a smaller “Pitcher” – such as the Pint Cereal Pitcher.  It does appear; however, that the larger capacity items were always called Jugs.  I find the Quart Jug to be a nice size – not too big (easy to handle) and not too small.  It was never called a “Boudoir Pitcher” by Fostoria Glass; however, it was one of five items that was used in a Boudoir Set.  The Boudoir Set included this 1 Quart Jug, the Oblong Tray, a 7¼” Candle, a Tumbler, and a Match Box.

Remember, all of the Fostoria American items were finished by hand, so there will always be slight variances in size.  Based on my own evaluation of the Quart Jug, these are its approximate measurements: 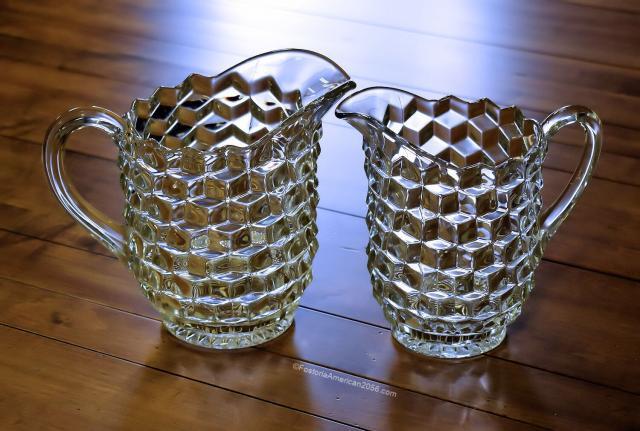 Here is a comparison photo showing the 3 Pint Jug and the Quart Jug.  The Quart Jug is slightly smaller in height and has a less-pronounced lip.

The Quart Jug seems to be more elusive than many of the other Jugs in the 2056 line.  In fact, it was the last Jug I added to my collection.  It took me a while to find it – partly because people had misidentified it – and partly because their supply is somewhat limited.  Due to its size and easy handling, it proved to be a great item to use in the 5-Piece Boudoir Sets.

If you are interested in purchasing similar Jugs and/or Pitchers in the American line, please click the following sponsored link for available Jugs on eBay.