The Fostoria American line produced two separate 3 pint-sized jugs.  The 3 Pint Jug featured in this post was the first one produced, making its debut in 1915.  It is; therefore, the oldest of the two jugs.  The other jug is the 3 Pint Ice Jug, which features a fabulous and full “lip” to hold the ice in the container.  For the most part, Fostoria Glass classified their larger pouring vessels as “Jugs”.  They did produce a smaller “Pitcher” – such as the Pint Cereal Pitcher.  It does appear; however, that the larger capacity items were always called Jugs.

Obviously, based on the name of this piece, it has a holding capacity of approximately 3 pints.  Three pints = 48 fluid ounces.  Interestingly, the Fostoria Glass Catalog of 1915 states that the holding capacity of this 3 Pint Jug was 55 ounces.  So, I decided to do a measurement test to see which holding capacity was correct.  My personal 3 Pint Jug could actually hold 55 ounces; however, the liquid was all the way to the top rim of the jug.  In other words, if you tried to move it, some liquid would inevitably spill over.  When I poured 48 ounces of liquid into the jug, it seemed a more reasonable amount – allowing me a couple of inches of breathing room from the top.  So, yes, it will hold 55 ounces … but I think 48 ounces (3 Pints) is a more accurate measure.

Remember, all of the Fostoria American items were finished by hand, so there will always be slight variances in size.  Based on my own personal items, these are the exact measurements of the 3 Pint Jug: 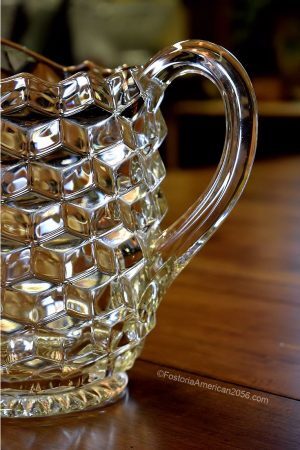 Like most other American items that have a handle, each piece is a work of art.  The handle is substantial, and starts at the very top of the jug.  It is thick and smooth, and quite easy to grasp – even for the biggest of hands.

There is another jug that has a 3 pint holding capacity in the American 2056 line; however, it has an ice lip.  It’s official name is the 3 Pint Ice Jug.  It is easy to distinguish from the 3 Pint Jug, for the version with the ice lip is shorter and stockier.

While one can usually find the 3 Pint Jugs without too much difficulty, they seem to be more elusive than the 3 Pint Ice Jugs.  The 3 Pint Jugs were produced for a long time, and eventually were discontinued towards the end of 1974.  The American Jugs are still a popular and beloved item – even in today’s modern home.  These are classic pieces, and just don’t go out of style.

If you are interested in purchasing similar Jugs and/or Pitchers in the American line, please click the following sponsored link for available 3 Pint Jugs on eBay.