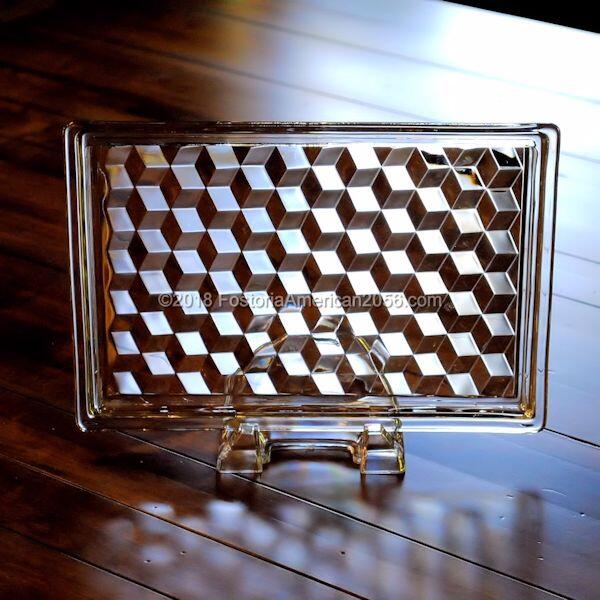 I will be the first to admit that researching the numerous trays in the American line has been an exhausting effort.  The 10½” Oblong Tray has been no exception.  In fact, this particular piece has the most varied and mixed history of all the trays in the Fostoria American line.  It is known by many different names, and was also used in a variety of different American sets.

Let’s start at the beginning … in 1917, when this tray was first born.  Catalogs originally state the tray as being 10½” in length; however, in years thereafter (as it became associated with different names) the measurement description would fluctuate between 10″ – 10½” in length.  The tray is oblong in shape and is about 7½” in width.  The top portion of the tray is smooth glass, and it has a beautiful rim that flows along all four sides.  These traits help ensure that any items placed on the tray will sit securely and not be prone to slippage.

My intention is to make this post as simple as possible, even though this item’s history is a bit complicated.  Thus, I will try to be concise by listing the names below that were associated with this tray.  At one time or another, the Oblong Tray was known by one of the following Fostoria names or descriptions:

Other unofficial names (typically used by book authors) were the 10½” Rectangular Tray and the #2056 Dresser Tray.  Some books state that this piece was only produced through 1943; however, I do not agree with those findings.  I am confident in my own research, as the Oblong Tray was still being offered in the late 1950’s.  In fact, it was available for purchase in 1957 as a single item, or as part of the following sets – the 8-Piece Decanter Set, or the 7-Piece Appetizer Set.  The Decanter Set consisted of the 10½” Oblong Tray, a Decanter & Stopper, and six 2 oz. Whiskeys.  The Appetizer Set consisted of the 10½” Oblong Tray and six Individual Appetizers. 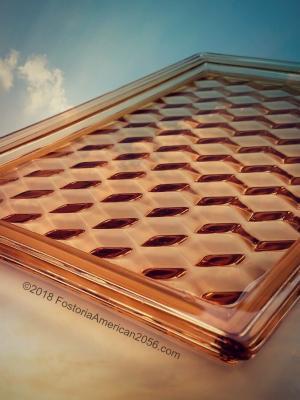 While the majority of these trays were produced in clear crystal, this item was also produced in the colors of Amber, Blue and Canary.  Of these three colors, the Canary items will be the rarest find – as they were only produced for one year.  Obviously, the trays of color are more valuable and rare when compared to the more plentiful clear crystal items.  The colored trays were available in the mid-1920’s, when Fostoria Glass was mainly promoting them as part of their 8-Piece American Boudoir Sets.

If you are interested in learning more about current availability and pricing for this piece, please click the following sponsored link for available Trays on Ebay.