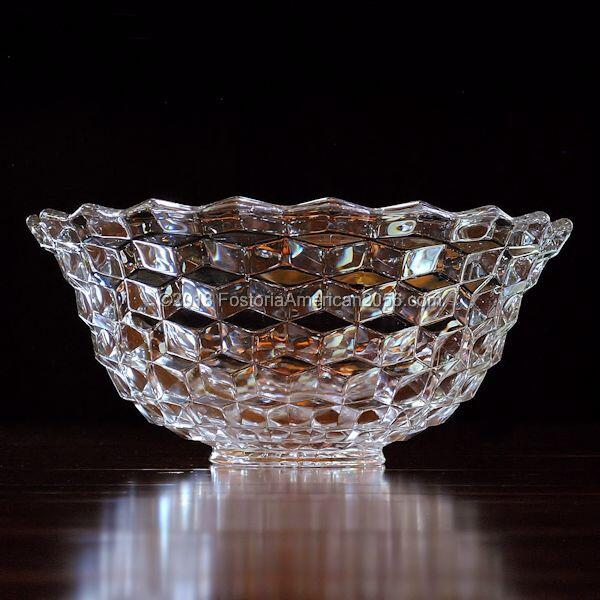 The Fostoria American Punch Bowls are exquisite.  This 14″ Punch Bowl was one of the first to be produced, along with its bigger sibling – the 18″ Punch Bowl.  Both bowls were part of the initial line-up of American dishes that were introduced to the public back in 1915.  It goes without saying that both vessels are a beauty to behold, and a pleasure to serve from.

Pieces commonly paired with the 14″ Punch Bowl are Regular and Flared Punch Cups (initially known as Custard Cups).  Punch Bowl Foots (Low and High) are also used with these bowls, giving them added height and stature.  The added integration of a Torte Plate is also popular today, providing a place for the Punch Bowl and/or Foot to rest – along with a multitude of Punch Cups sitting around the plate’s edging. 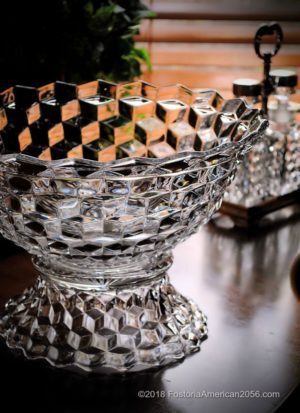 This particular Punch Bowl has a holding capacity of approximately 2 gallons and is about 6½” in height (without a Foot).  The top opening is 14″ in diameter.

There is another 14″ Punch Bowl in the American pattern; however, it was produced for only a year or so – and in very limited quantities.  The newer spun version was never officially cataloged by Fostoria Glass.  I believe it was an experiment that ended in unsuccessful results.

The original 14″ Punch Bowl, as pictured in this post, is the punch bowl that is listed and featured in most of the Fostoria Glass catalogs.  It was produced from 1915 until 1982, making it the longest-running punch bowl in the American pattern.  It can be perched on either a Low or High Foot, giving it variations in height and presence.  Of all the punch bowls made in the 2056 line, the original 14″ Punch Bowl remains one of the most popular.

If you are interested in learning more about current availability and pricing for this piece, please click the following sponsored link for available Punch Bowls on eBay.