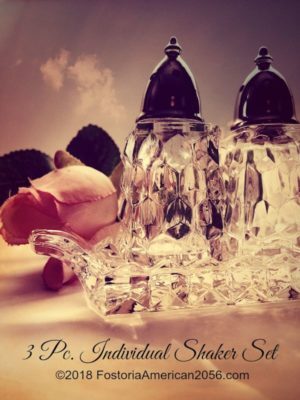 The Individual Shaker Trays are precious.  With a petite size of approximately 4″ in length (from handle to handle), they are only about 1½” in width.  They have two compartments, with a slightly raised partition in the center, that holds the Individual Shakers neatly in place.

If you are interested in learning more about current availability and pricing for this piece, please click the following sponsored link for available Salt and Pepper Trays on eBay.

The Trays are harder to find by themselves, and are most often sold as part of the 3-Piece Individual Shaker Set.