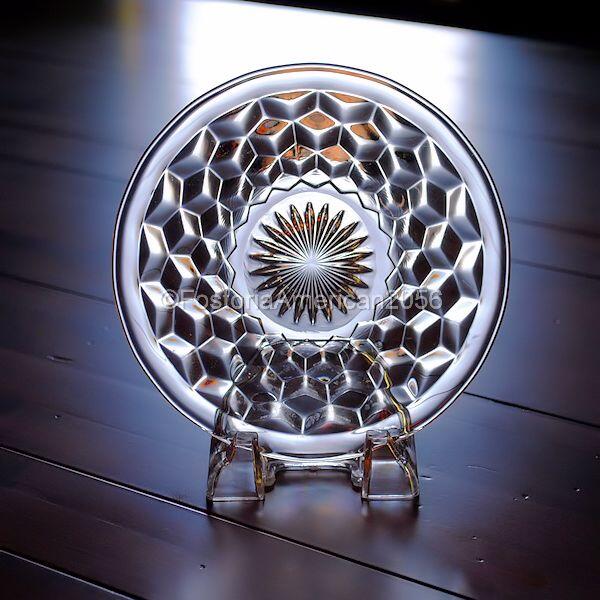 The Fostoria American Finger Bowl Plate served as an underplate for the Finger Bowl.  Many people today have never heard of using such a bowl or plate; however, in bygone years it was a custom that was used just prior to serving the dessert course.  The original Finger Bowl Plate is featured in the 1915 Catalog Supplement, which is when it was first produced.

It has been published in one book on Fostoria American that two versions of the Finger Bowl Plate were produced – the old version that has a smooth edge (pictured in this post), and a newer version which has a serrated edge.  Based on my research, I can not verify that statement.  Searching through official Fostoria documentation and catalogs, I have not been able to document where Fostoria Glass used any other underplate for the Finger Bowl other than the one shown in this post.  The “newer” version that some people refer to is simply an Ice Tea Plate. 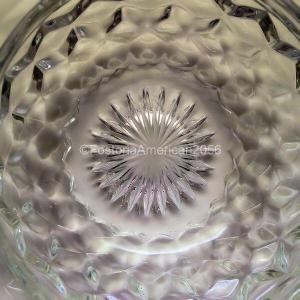 Finger Bowl sitting upon a Finger Bowl Plate. Both pieces came from the same mould, so their center design is a mirror image of one another.

The Finger Bowl Plate is easy to recognize if you look for three things – the edges, the center design, and the size.  Being approximately 6½” in diameter, there is one distinguishing factor that I think is most important – the mould from which it came from.

If you are interested in learning more about the current availability and pricing of similar items, please click the following sponsored link for available Finger Bowl Plates on eBay.