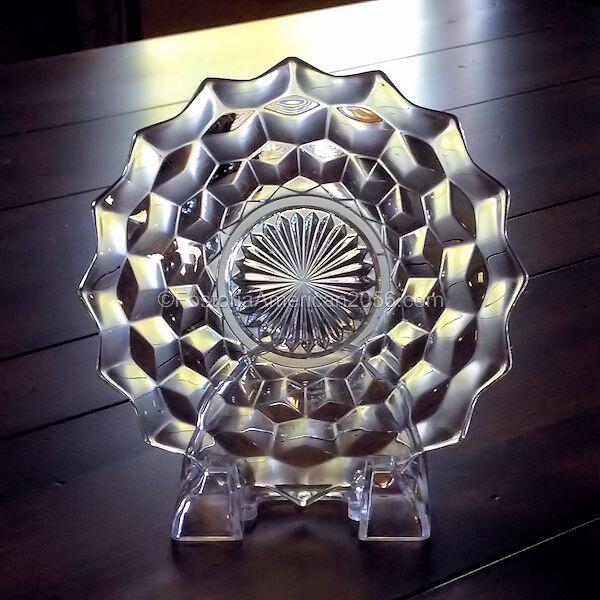 The Fostoria American Syrup Plate has consumed more of my research time than any other plate in the American line.  In the end, I have had to come up with my own conclusions … based on my own research.  I have no doubt that other people will have different opinions about this topic; however, I can only write about what I know to be personally true.

These are the facts as I know them, without conflict.  The Syrup Plate is the underplate that you usually see paired with the Syrup and Cover.  When it was featured in the Fostoria Glass catalogs, they showed the three items together – with a description of “Syrup and Cover and Plate”.  The plate diameter is approximately 6-inches, based on Fostoria’s own catalog descriptions and my personal measuring of the piece.

The mould shape that made the Syrup Plate came from the 4½” Regular Nappy. This particular mould was responsible for several pieces in the American line – such as the Finger Bowl Plate, Ice Tea Plate, Bread and Butter Plate, etc. Therefore, if you look at the center of this plate – it has a similar design to the pieces I just referenced.  In fact, and most importantly, the Syrup Plate was actually made from the 6-inch Bread and Butter Plate.  Therein lies the confusion. 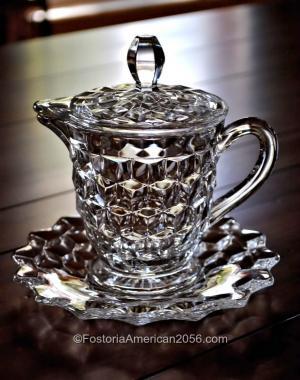 The main difference between the two pieces is that the Syrup Plate will “usually” have taller side edges and a slightly deeper indentation in the center of the plate than the Bread and Butter.  That being said, it is not always the case.  Pieces that I personally own, and that I have witnessed at Glass Shows, will usually have sides that go slightly up from the center of the plate. This design creates a slight well for the Syrup to sit in, keeping the vessel more secure.  From there, the glass starts to flow outward.  Even in the Fostoria Catalogs, their drawings of this particular piece do not have outer edges that flare upward.  They seem to reach outward, rather than upward.

Also worth noting, unlike some of the other underplates in the American line, the Syrup Plate did not have its bottom ring ground off.  This is also true for the Bread and Butter Plates, making their distinction even less apparent.

If you reference different books on Fostoria American, chances are you will see different dates of production for this piece.  I rely on Fostoria Glass Company catalogs, and I can verify that the piece first entered production in 1938.  From my best estimates, the piece was produced from 1938 – 1944.

If you are interested in learning more about current availability and pricing for this piece, please click the following sponsored link for available Syrups on eBay.

The Syrups are not a common item, so the search results will not be as plentiful as other pieces in the American line.  Some sellers sell the Syrup, Cover, and Plate together (if they’re lucky enough to have them), and some will sell the individual items separately.  Therefore, you might need to modify your search criteria accordingly.