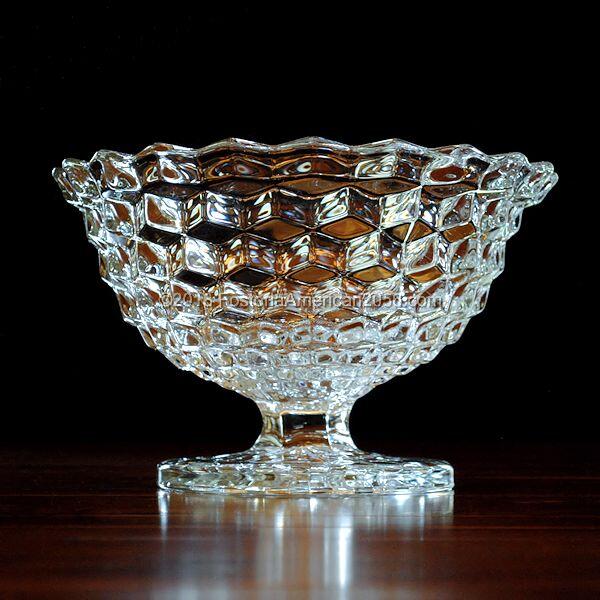 There has been confusion in the past about a similar American-looking piece that was produced in Czechoslovakia.  If you preview this Look-Alike link, search for item #1272 – the Footed Bowl.  The piece referenced to in the above link was not produced by the Fostoria Glass Company.  These bowls can be found in crystal, blue, green, etc. 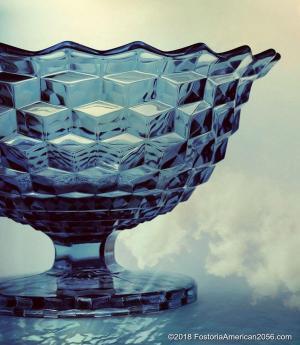 Once the Fostoria factory closed in 1986, Dalzell Viking produced this piece under the Fostoria American label in limited colors of cranberry/pink and grey/blue.  If you have a Fostoria piece – in either of these two colors – then it was an item produced from approximately 1986-1998.

How can you tell the difference between the European item and the American item?  The Libochovice Footed Bowl is about 8¼” – 8½” high, which is taller than the American piece.  It is also smaller in diameter, by about 1½”, than Fostoria’s Small Punch Bowl.

The Small Punch Bowl (aka Footed Fruit Bowl, Tom & Jerry Bowl) was made from 1915-1970.  Throughout the years, mould changes and/or repairs could slightly change its look or shape.  While the majority of the pieces made had a flared shape, it is possible to find several that were not.  Based on catalog renderings, the top edges of older bowls don’t appear to be nearly as flared as the newer versions.

No matter how you use it, or what you call it … this piece of Fostoria American is amazingly versatile – and quite beautiful.  Unlike other punch bowls in the line, the Small Punch Bowl is footed.  It stands proudly all on its own, without the assistance of any other pieces.  The base of the foot is approximately 7¼” in diameter.  From the foot to the top rim, the Small Punch Bowl stands about 7¾” high.  Expect slight size variations though, as some have been reported to be slightly taller.

If you are interested in learning more about current availability and pricing for this piece, please click the following sponsored link for available Small Punch Bowls on eBay.