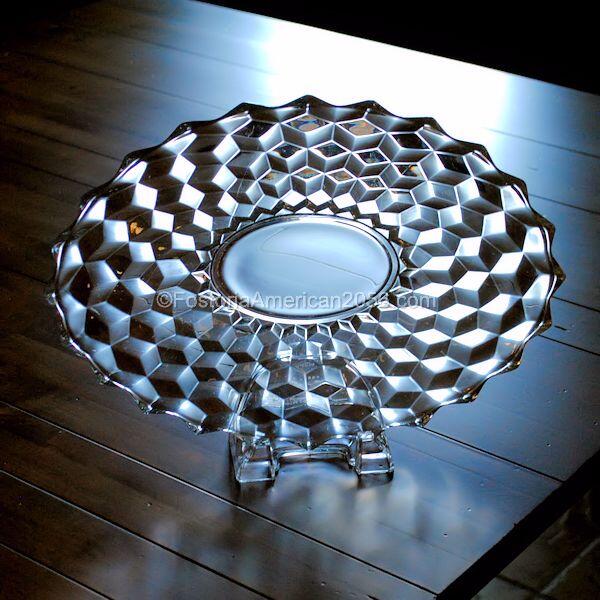 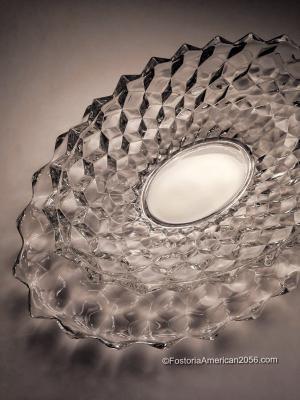 The mould of the Oval Vegetable Bowl was used in the making of the Oval Torte Plate.  Since the genesis of the plate came from the mould of the bowl, the two pieces will be similar in design – yet different in shape.  In order to make plates from the bowl mould, Fostoria workers flattened the glass.  The Oval Torte Plates had two variations – a plain center, and a center with rays (the same is true for the bowls).  The first and more common variation is the plain center – void of any design.  The latter variation is the one with rays on the bottom, and is considered more rare.

As displayed in this picture, the Oval Vegetable Bowl is sitting directly on top of the Oval Torte Plate.  It is quite obvious that they came from the same mould, with their center bottoms matching perfectly.

The Oval Torte Plate is substantial in weight and function.  While this particular piece is not as common as other items in the American line, you can usually find them fairly easily.  I seem to find more of them online than when visiting antique stores.

If you are interested in learning more about current availability and pricing for this piece, please click the following sponsored link for available Oval Torte Plates on eBay.