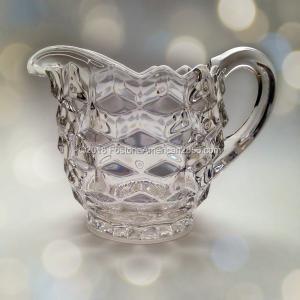 The Fostoria American Creamer (AKA Cream) is the largest of the three tabletop creamers.  Unlike the Individual and Tea Creamers, the regular Creamer was not sold in a set.  It does have a companion piece; however, in the Sugar & Cover.  The two separate items complement each other nicely.  This Creamer is the perfect size for serving more than one person.

The Creamer is another pioneering piece in the American line.  It debuted in the 1915 Catalog Supplement that first introduced the American pattern, and it continuously stayed in production until the very end – circa 1982. American Whitehall (on the left). Fostoria American (on the right).

The American Whitehall pattern did produce a Creamer that is very similar to the Fostoria American piece.  As seen in this picture, one defining difference between these two items is the placement of their respective handles.  The Fostoria handle starts at the very top rim of the Creamer. The American Whitehall handle; however, starts about ½” below the top rim.

If you are interested in purchasing similar Fostoria American items, please click the following sponsored link for available Creamers on eBay.

Measurements are approximate and might vary due to mould changes or quality of craftsmanship over the years. The same is true for colors, as their shades may range from light intensity to medium or darker tones.

If you are interested in learning more about current availability and pricing, please click the following sponsored link for available Creamers on eBay. 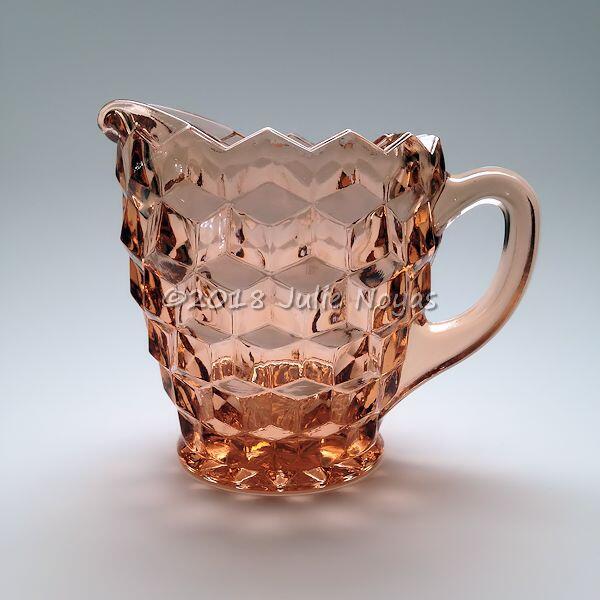