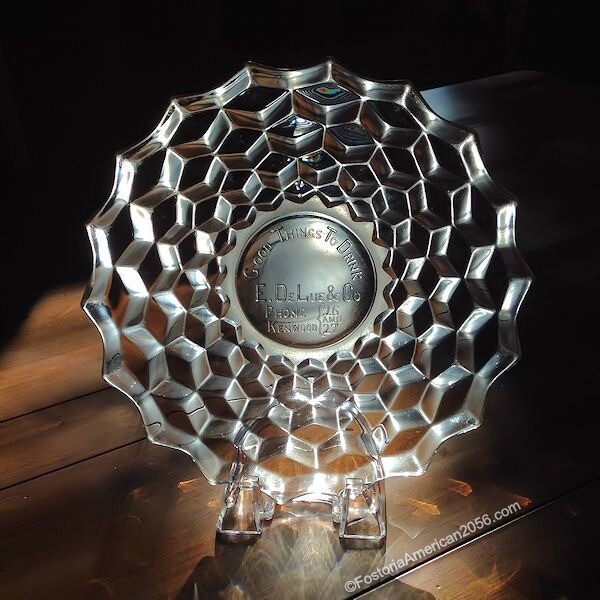 The Fostoria Glass Company would sometimes alter regularly produced items in order to make specialty pieces for other companies.  If a company wanted to have an item specifically made for them – and were willing to pay all the required costs involved – Fostoria Glass would make the piece.  The E. DeLue & Co Plate is one such example.

While this plate is, indeed, Fostoria American – it is not an item that was produced for the general public, nor was it displayed in their catalogs portraying the American line.  You might read about this piece in some published books on Fostoria American; however, it was not a standard or regularly produced plate.  It was made solely for E. DeLue & Co.

An interesting fact about this specialty plate is that it was made from the American 9-inch Sandwich Plate.  The differences in the E. DeLue & Co Plate is that the edges of the plate flare up higher, and there are no center rays in the middle of the plate.  The clear glass in the middle of the plate displays the words “Good Things To Drink E. DeLue & Co Phone Kenwood {26 and 27”.  The underside of the glass center is slightly indented, possibly to help protect the lettering. 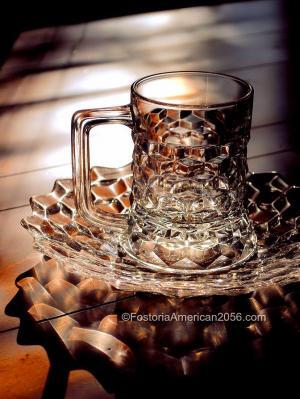 Since the plate itself refers to “good things to drink”, I try and pair it with a drinking vessel.  The Beer Mug/Tankard is most appropriate.  The underside of the mug is indented; thus, it fits the raised center of the plate quite nicely.  Also, with the plate’s edges flaring slightly upward, it seems to keep the mug from slipping and moving about.  The two pieces just look like they should go together – aesthetically, and because of the wording on the plate.

The E. DeLue & Co Plate that I own has certainly led an exciting life.  It is not without scratches, and if it could talk, I am sure it would have some vivid and entertaining tales to tell.  I was not able to retrieve much information about the Kenwood-based E. DeLue & Company in my research; however, I believe it was in existence sometime around the turn of the 20th century – possibly through 1918.  The 9-inch Sandwich Plate was one of the first pieces to be debuted in the American line in 1915, so it would appear my plate is very old.  It is well entitled to any and all scratches and marks it now displays.  Amazingly, there are no chips or cracks!

If you are interested in learning more about current availability and pricing on a variety of Fostoria American plates, please click the following sponsored link for available Sandwich Plates on eBay.