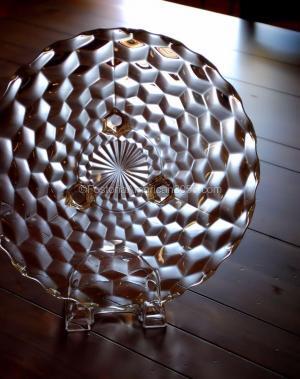 The Handled Cake Plate is a very versatile piece.  When compared to other Fostoria American cake serving pieces, it is smaller in scale and general appearance.  With two handles, it is very easy to transport from one place to the next – and is not bulky in weight.  It is a very useful dish for serving a variety of foods – from desserts, appetizers, breads, etc. 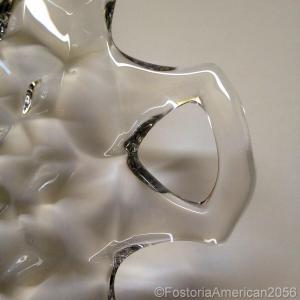 The Handled Cake Plate is approximately 10″ in diameter.  The measurement from handle to handle is about 12″.  It has a beautiful starburst (or ray) design in the center.

This piece was first introduced around 1948 and then produced for many years afterward – up to about 1982.   A more common piece in the Fostoria American pattern, it will not be too difficult to locate in today’s aftermarket.  If you are interested in purchasing this piece, please click the following sponsored link for available Handled Cake Plates on eBay. 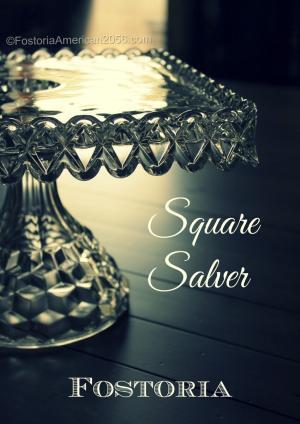 This is the Fostoria American Handled Cake Tray (with a metal handle).  While it is called a Cake Tray, it can be used to serve a variety of other foods, other than cake.  It has an approximate diameter of 10½” and has a shiny metal handle in the center of the plate tray. The metal handle is substantial, and looks somewhat like a question mark. 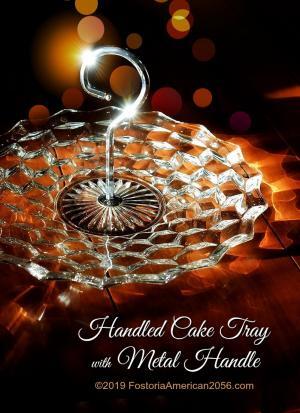 Unlike some of the other Fostoria American cake stands and servers, this piece was only produced for about a decade.  An older piece of the Fostoria American pattern, it will not be as plentiful on the open market … but still, one can usually buy the Handled Cake Tray without too much difficulty.

My fascination with this particular version of the Fostoria American cake servers is that it is different.  It has a chrome metal handle that shines, and a plate tray that reflects light and color brilliantly.  It is beautiful and elegant … but understated.  Perfect for just about any occasion – formal, or otherwise.

If you are interested in purchasing this piece, please click the following sponsored link for available Handled Cake Trays on eBay. 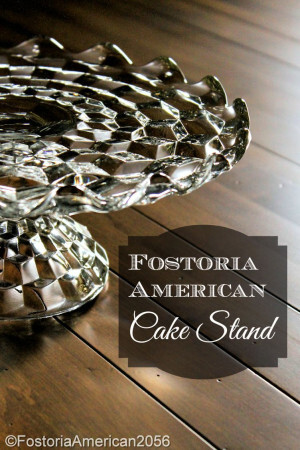 While this Cake Stand was produced in the latter part of Fostoria’s reign, as such – it had a shorter production life.  It is slightly lighter in weight (though still heavy) than the Round and Square Salvers, and it bears a different design on the plate’s edge.  The edges flow upward, with graceful curves or points.  Another difference worth pointing out is that this piece does not have an indentation (or “well”) in the center glass. 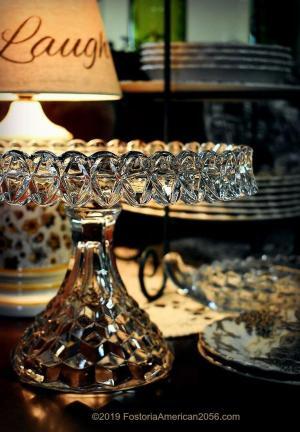