I am thrilled to share what I know about the American Candy Tray, for it is one of those pieces that is not seen all that often.  Unfortunately, the Candy Tray is rarely talked or written about.  Indeed, there are books on the American pattern that don’t even mention its existence!  The reason for it is still a mystery to me, for it is a rare gem and definitely worth our admiration.

The Candy Tray is special because of its age, unique shape, and limited production run.  It was born in 1916, over one-hundred years ago!  This is not an item that was produced for decades on end, like many of the other pieces in the American line.  The Candy Tray was only made from 1916 – 1925.  These pieces are respected elders in the Fostoria family, and they certainly deserve our utmost respect. 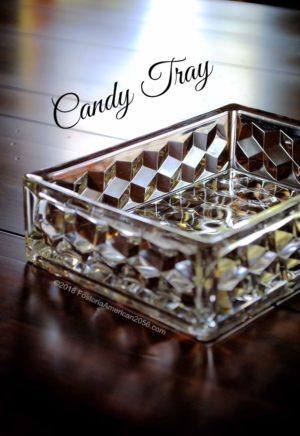 The Candy Tray is often referred to as an “Open Candy Box”.  With higher sides than most trays, it easily looks like a box.  However, most boxes have lids; this piece does not.  With no lid or cover, this might be the reason why Fostoria officially classified this piece as a tray, rather than a box.

The overall measurement of the piece is approximately 7″ x 5″, with sides that are about 1½” high (considerably higher than most American trays).  It is extremely well-crafted, with great clarity, luster and weight.

If you are interested in learning more about current availability and pricing for this piece, please click the following sponsored link for available Candy Trays on eBay.

Since people call this item a tray and/or a box, I have included those terms in the search criteria. Results will be minimal for this exact item, if any. Do keep checking; however, for they do show up every now and again.

The Comport and Cover is a beautiful piece of Fostoria American glass.  You might be asking, “What is a Comport?” According to Dictionary.com, it is a glass dish of the 18th century used for holding fruit or candy and having a wide, shallow top supported by heavy stem and foot; compote.”  Based on what you see in this photo, that is exactly what this Comport looks like.

The Comport (with the Cover) has a height of about 9″ – and a diameter somewhere between 5″ – 5½”.  Old Fostoria catalogs state the diameter as 5 inches; however, my own personal pieces measure in between 5¼” to 5½” in width.  Remember, these items were handmade – so expect some slight variation in measurements.

The Comport and Cover looks like the Big Sister or Big Brother to the Jelly and Cover.  Their stems are different, as well as their size; however, they just look like they belong together.  I usually showcase them together, as they compliment each other beautifully.

This piece was produced for a very long time – from around 1924 to circa 1982 – and is not too difficult to find in today’s market.  If you are interested in purchasing the Comport and Cover, please click the following sponsored link for available Comports on eBay.

I would also suggest that you search for the additional term “candy dishes”, as some people are not aware that the dish was called a Comport.

With the Cover attached, the height of the 3-Part Candy Box is approximately 4″, with a width of about 6⅛”.  These measurements can vary, and there are some published books that document the width at 7″.  Actual Fostoria catalogs state the width at 6⅛”, which is what my personal 3-Part Candy Box and Cover measures in at.  Just remember that these items were handmade; hence, slight fluctuations in measurements is to be expected. 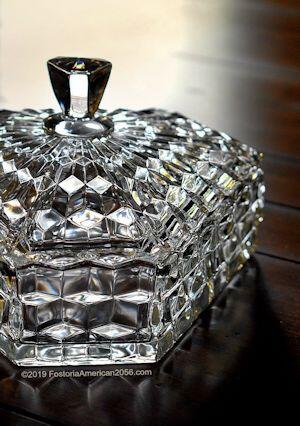 The 3-Part Candy Box and Cover first appeared around 1937, and even though it was in production until the early 1970’s, there were other candy dishes in the American pattern that were produced for longer periods of time.  Because of the unique design of the 3-Part Candy Box, and the fact that it had fewer years in production than most of its candy-related counterparts – this piece is not a common item.  Even so, these pieces are not too difficult to locate.  Many times you will find just the bottom dish, with no Cover – or vise versa.

As with all the pieces that had Covers or Lids, you need to make sure the edges of those pieces are not nicked or crushed before purchasing.  If you want to purchase a similar item, please click the following sponsored link for available 3-Part Candy Box and Covers on eBay.

Finding a Footed Candy and Cover today that does not have any fleabites, nicks, or dings in the rim of the Cover might be a bit challenging.  If you find one with nicks or damage, keep looking … for excellent specimens can still be located. The actual Candy and Cover (two pieces) interlock with each other, so if someone hastily – or harshly – puts the Cover back on, damage could occur. When searching for this piece, be sure to take the Cover off and inspect it.  If searching online, try to get the Seller to display a picture of the Cover’s bottom rim before purchasing. 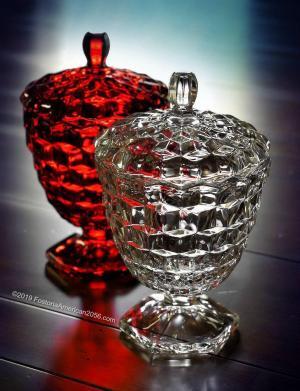 The Footed Candy and Cover stands approximately 7″ tall (with the Cover on).  Since the clear crystal version was produced for many years, it is not considered a rare item.  However, Fostoria Glass also produced this piece in the American Ruby color.  Unlike the clear crystal version which was produced through 1982, the Ruby version was one of a handful of American Ruby items that was offered in 1983.

Since people sometimes refer to this item as the Hexagon Footed Candy Dish, you might need to modify your search terms accordingly.

Sugar and Cover (aka Candy Jar)

The Sugar and Cover originally debuted in 1915.  Decades later, Fostoria modified the name to “Sugar and Cover” and/or a “Candy Jar and Cover”.  Many folks refer to this piece as a “Barrel Sugar” – simply because of its appearance.   Whatever name you prefer, this beautiful piece will serve sugar, candy, and an assortment of other food items – in grand style. Of all the sugar servers produced in Fostoria’s American pattern, this Sugar and Cover is the tallest.  It is about 6¼” tall, measured with the Cover on.  My own personal piece measures 6½” in height.  Slight size variations are to be expected, especially when you consider that all the American items were handmade. 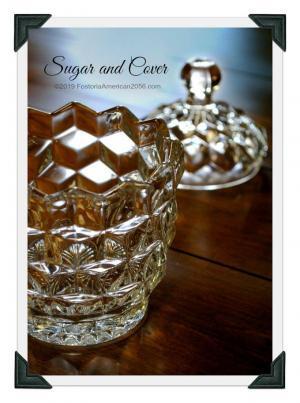 In my scrapbook of Fostoria memories and treasures, the Sugar and Cover is one of my most favorite American pieces.  I like the fact that it is versatile in purpose – being able to use it for serving both sugar and/or candy.  It also is not as common as the other sugar servers in the American pattern, so there is a bit of mystery behind it.

In the original 1915 Fostoria American Catalog Supplement, it was this Sugar and Cover that was predominately featured next to the Cream Pitcher.  Fostoria also produced (circa 1915) a smaller Individual Sugar, without a lid.  The Handled Sugar and Cover came into production later.

Please click the following sponsored link for available Sugar and Covers on eBay.

Since people sometimes refer to this item by different names, you might need to modify your search terms accordingly.